This is an 11 mile round trip starting at the Old Dungeon Ghyll Hotel in Great Langdale. The route reaches Scafell Pike via Rossett Gill and Esk Hause. 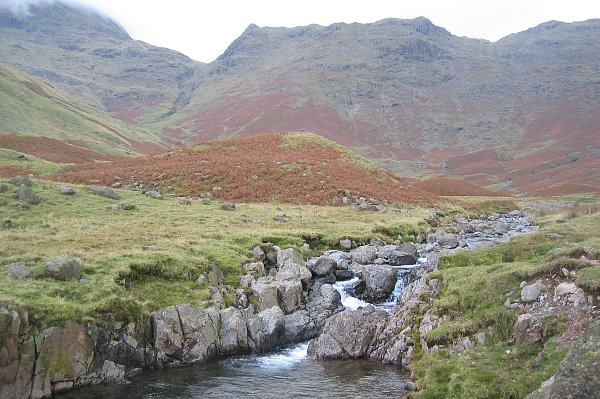 Looking towards Rossett Gill from Mickleden. Rossett Gill can be seen below the gap in the fells on the left of the picture. Rossett Pike is above to the right. Photograph by Ann Bowker

This route heads west from the Old Dungeon Ghyll Hotel under Raven Crag before going North West alongside Mickleden Beck. Crossing Stake Gill, the path climbs alongside Rossett Gill before reaching Angle Tarn. After Angle Tarn, the route heads North West towards along the Sty Head path before turning off south west to reach Esk Hause.

From here the path climbs onto the main ridge of the Scafell massif south of the summit of Great End. Continuing south, the path skirts the boulder strewn Ill Crag and Broad Crag before finally climbing to the summit cairn of Scafell Pike.

View of Broad Crag (centre) and Scafell Pike (left) taken from Ill Crag. You can just about make out the rocky path traversing Broad Crag. Wainwright notes that many people who have arrived at this point from Esk Hause, had expected to be within easy reach of Scafell Pike summit only to be dissappointed that such a distance still needs to be travelled - He writes "Many hearts have sunk into many boots as this scene unfolds. Here, on the shoulder of Ill Crag, the summit comes into sight at last; not almost within reach as confidently expected by walkers, but still a rough half mile distant, with two considerable descents ... and much climbing yet to be faced before the goal is reached" (Wainwright 1960 The Southern Fells). On the bright side, however, the scenery is incredibly spectacular and dramatic. Photograph by Ann Bowker

The return route back to Langdale can be varied to take in Esk Pike and Bow Fell. 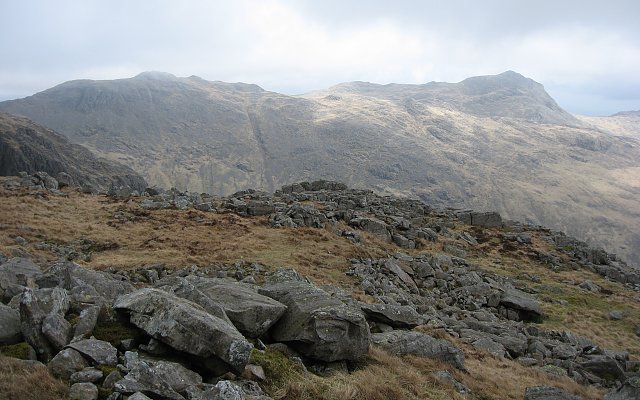 View of Esk Pike and Bow Fell taken from the slopes of Scafell Pike. Photograph by Ann Bowker

From Scafell Pike Summit, the route goes back across the main ridge passing Broad Crag and Ill Crag before reaching Esk Hause. Here the route follows the East path from the crossroads before turning South East and ascending Esk Pike. The route then continues past Bow Fell before dropping down to three tarns. The route then turns off to the left and descends back to Great Langdale via the band. 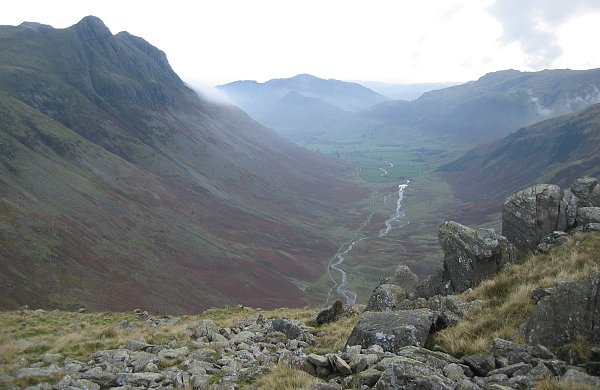 View from Rossett Pike looking back down to Great Langdale. Photograph by Ann Bowker 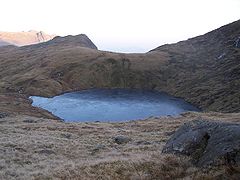 View of Angle Tarn with Rossett Pike behind to the left. Photograph by Mark Croston 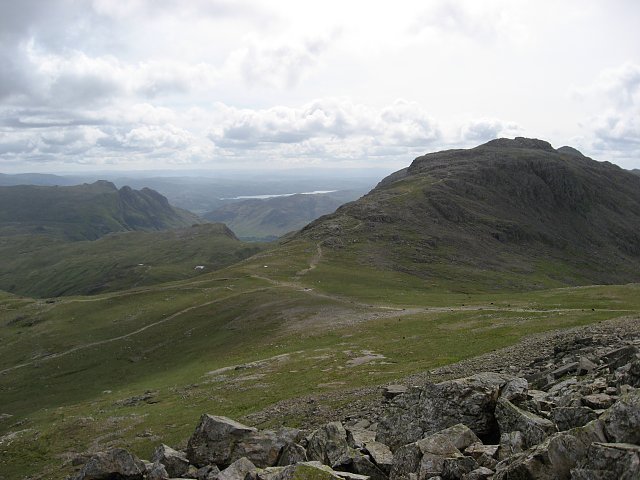 On the return from Scafell Pike, the route can be varied to take in Esk Pike and Bow Fell. The picture shows the point at Esk Hause where the route heads up to the summit of Esk Pike on the right. Photograph by Ann Bowker 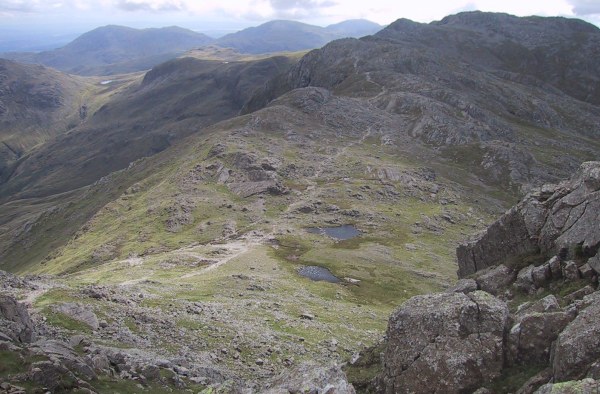 Descent of The Band into Great Langdale. Photograph by Ann Bowker